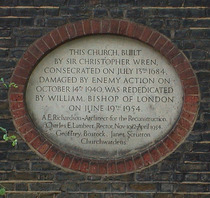 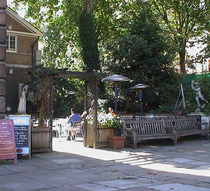 Looking at the cafe picture:
- The war damage plaque is on the wall that you can just see on the left.
- On the right you can see one of the four cherubs belonging to the Southwood fountain.

This former graveyard was opened as a garden, funded by Viscount Southwood, in 1946 by the Queen Mother.

On a visit in about 1998 we found a small hand-made memorial in amongst the plants, to Taffy, a tramp who had made the garden his home and had recently died. When we went back some years later with our camera this, not surprisingly, had gone so we sadly cannot include it here.  2012 - Discovering London (dead link) have a picture of Taffy's sign plus one for Mackerel the Rectory Cat.

This section lists the subjects commemorated on the memorial on this page:
St James's war damage

This section lists the subjects who helped to create/erect the memorial on this page:
St James's war damage

This section lists the other memorials at the same location as the memorial on this page:
St James's war damage