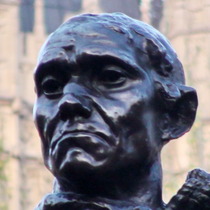 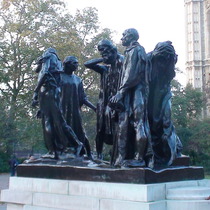 {Inscribed on the front, south, face of the plinth:}
The Burghers of Calais by Auguste Rodin

{Inscribed on the back of the plinth:}
Presented to the nation by the National Art Collection Fund 1914.

{On a bronze plaque above:}
The conservation of Rodin's The Burghers of Calais and the new plinth were funded by Nicholas Goodison (Chairman, National Art Collections Fund 1986 - 2002) and Judith Goodison, in 2004.

Created for the town square in Calais following France's devastating defeat in the Prussian War. Erected there in 1895. There are twelve original bronze casts of this work around the world.

This section lists the subjects commemorated on the memorial on this page:
Burghers of Calais

In the midst of the 100 year war between France and England Edward III had th...

This section lists the subjects who helped to create/erect the memorial on this page:
Burghers of Calais

"Helping museums and galleries buy art for everyone to enjoy".  Previously kn...

The relief panels, by Montford, on the four sides of the plinth show scenes f...