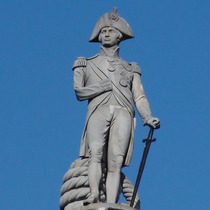 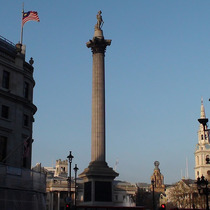 Erected to commemorate the Trafalgar victory over Napoleon of 1805. The height, from top of hat to pavement is said to be 170 feet and 2 inches, the distance from Victory's main masthead to the quarterdeck. Nelson himself is 17 feet (5 metres) tall, looking to his right to salute his fleet. The proportions of the column are copied from the columns at the temple of Mars Ultor in Rome - we got both pictures up on the screen side by side and we believe it. The bronze panels around the base depict some of Nelson's battles. Watson died before he could execute his design for his panel and Woodington completed it instead. Railton designed the column. The statue is by Baily. The lions at the base were added in 1867 and are by Landseer, cast by Marochetti, we understand, although some sources say the casting was by Morris Singer.

Shortly before the statue was installed 14 people indulged in a steak dinner at the top of the column.

There is a small version (about 4 foot high) of the statue in a side room at the Painted Hall in Greenwich, in the same room where they keep the table on which Nelson's body was almost certainly laid out on.

From Londonist we learn about some items that were removed from Trafalgar Square. "Thomas Milnes originally made four stone lions, but they were judged not impressive enough for the memorial to Nelson, and were in the end bought by Titus Salt, and sent to his village of Saltaire, where they remain today." And the fountains that we see today, designed by Lutyens, were only unveiled in the 1948. They replaced the original 1845 Charles Barry fountains. Barry's large basins were kept but his fountains were sent off to two different sites in Canada.

2021: We heard a piece of archive BBC radio where a man involved in cleaning the statue didn't just mention the extraordinary quantity of pigeon poop that had to be removed, he also estimated about 50kg of dead pigeons at Nelson's feet.

Some of the earliest ever photographs are of this being erected. At the four corners of the square are plinths holding octagonal lamps which are said to be the oil lamps from Nelson's flagship, Victory. Note: At the south-east corner of the square there is an extremely small police lookout post. In 1826 there was a lamp then in 1926 a phone line and light were installed so the police could call for assistance. Sadly it is now a store room. More at Londonist.

This is not the only "Nelson's column". They were erected all over the world and Londonist has done the research.

This section lists the subjects commemorated on the memorial on this page:
Nelson's column

This section lists the subjects who helped to create/erect the memorial on this page:
Nelson's column

Ornamental Passions us that "The statue is a copy of one made in 1895 by the ...