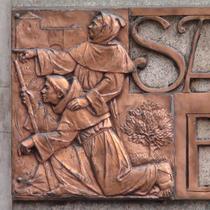 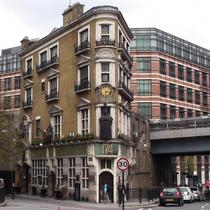 The Blackfriar
This art-nouveau masterpiece was built in 1905 on the site of a former Dominican Friary which existed from 1279 - 1539. Following the 260 years of the Dominican Friars the site became the parliament chamber of the monastry. It is believed that Emperor Charles V, the Papal Magistrate and Henry VIII's court sat on this very site during the dissolution of Henry VIII's marrage to Catherine of Aragon in 1532. The Black Friar has been a favourite watering hole for many since the 'merry monks' first settled on this site. Its unusual shape is due to the fact that all the surrounding buildings have long since been demolished, taking with them the small alleyways that were once the only access to the pub. This wonderful pub was due for demolition in the sixties but the public outcry led by Sir John Betjeman and Lady Dartmouth saved the building.

The plaque is a perfectly nice pub plaque but the pub is adorned with many lovely art nouveau images, in metal and stone, of monks either drunk already or making their way, some on their knees, to the Saloon Bar. So we have captured one of these instead.

Built in 1875 by H. Fuller Clark but the exterior decorations which make it so memorable were added in 1903 by sculptors Nathaniel Hitch, Frederick T. Callcott and Henry Poole. Saved from demolition in the '60s by John Betjeman.  More photos of this lovely building at Caroline's Miscellany.

This section lists the subjects commemorated on the memorial on this page:
Black Friar pub

Built on the site of the Norman fortification known as Baynard's Castle which...

Born Ghent. Ruled over large chunks of Europe and the Spanish colonies in Ame...