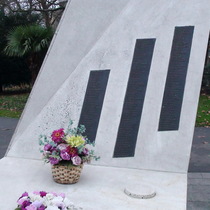 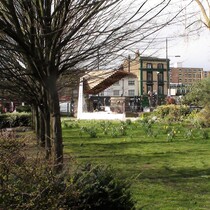 {On the main plaque:}
The Bethnal Green Tube Shelter Disaster
On 3 March 1943 the air raid warning sounded at 8.17pm. People made their way in the pitch dark of the blackout to file in an orderly manner down the steps of the single entrance to the unfinished Bethnal Green underground station next to this memorial. It had been in regular use since 1940 as a deep air raid shelter.

Over the next 10 minutes local pubs and cinemas emptied so that some 2000 people were already in the shelter by 8.27pm when the searchlight went on. Those still waiting to enter were alarmed by the deafening sound of a new anti-aircraft rocket battery opening fire for the first time nearby. They assumed it to be enemy bombs falling. At that time three buses set down their passengers at the unsupervised shelter entrance. The crowd hurried down the poorly-lit 10 foot wide first flight of 19 concrete steps which had no central handrail. On this wet, slippery stairway a woman with a child fell on the 3rd step from the bottom and others tumbled over her. The crowd above continued pressing forward unable to see the horror of what was happening below. Within seconds the whole staircase was a solid, tangled mass of 300 people trapped five or six deep.

Despite heroic efforts, rescuers working above and below found it difficult to release them before they suffocated in the crush. It was 11.40pm before the last of the total 173 dead was pulled out – 84 women, 62 children and 27 men. Sixty-two people were hospitalised and at least 30 more walked away wounded. Many more suffered life-long trauma. This was the worst civilian disaster of the Second World War.

{3 plaques on the upright part of the monument carry 173 names, with their ages. See Subjects commemorated.}

We have transcribed all the names and the main plaque. Scattered across the top surface of the monument are 15 other plaques, each giving some details about an individual victim or the remembrances of a survivor.

This memorial is a long time coming. It has been under construction or partially complete since at least 2013. As at late 2016 the staircase component still had to be added. We finally captured it in 2020.

STHM is informative about how the monument came into being. Arboreal's page about the design of the monument is interesting but does not explain the significance of the wavy line of steel pavement studs that writhes around it. Stairway to Heaven Memorial seems the most complete site, listing the names of the dead and giving their stories.

This section lists the subjects commemorated on the memorial on this page:
Bethnal Green WW2 disaster - monument

The worst civilian disaster of WW2. 173 men, women and children lost their li...

This section lists the subjects who helped to create/erect the memorial on this page:
Bethnal Green WW2 disaster - monument

Transcribing the names was very difficult and there are probably errors, part...

The instruction "See that ye conquer by living as we have conquered by dying"...