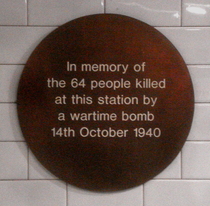 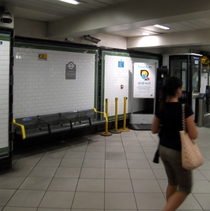 In memory of the 64 people killed at this station by a wartime bomb 14th October 1940.

Plaque 1 incorrectly states that there were 64 people killed in this incident. The Wandsworth Guardian carries the story of how it was discovered that 3 tube workers were not included in that total and TfL was asked to replace plaque 1 with plaque 2, where they wanted the correct total of 67 but the plaque avoids the issue altogether by not specifying a number. We've left plaque 1 on London Remembers for the record, even though it is no longer at the site - IanVisits reports that it is in the LT Museum.

But then in 2014 the Moorgate station plaque was installed, hand carved in the Johnston typeface on Welsh slate. This was considered an appropriate design for memorials of this nature and the decision was taken to use it as the template for the Stratford station plaque and two planned plaques, at Bank station and Sloane Square station, the final two TfL sites that saw significant loss of life in wartime bombings and where no memorial is present. And it was then a short step to the decision to replace the Balham plaque with one in this style. Plaque 2 will be found a home at the LT Museum, probably alongside P1. All this information was provided in 2016 by Mike Ashworth, Design and Heritage Manager of TfL. He also confirmed the reasons for the first replacement: P1 was ‘unofficial’ and got the number of victims wrong; P2 was created to the then official design for heritage signage and prudently gave no number.

This story of the three plaques really brings home the perils of plaque erection. We thank Mike and TfL for their efforts and congratulate them on finding a fittingly dignified design for these plaques.

This section lists the subjects commemorated on the memorial on this page:
Balham Station bombing - 1

This section lists the other memorials at the same location as the memorial on this page:
Balham Station bombing - 1