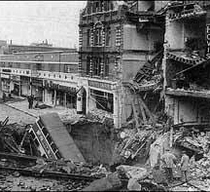 During World War 2 Balham was one of many deep tube stations designated for use as a civilian air raid shelter. At 20:02 on 14 October 1940, a 1400kg semi-armour piercing fragmentation bomb fell on the road above the northern end of the platform tunnels, creating a large crater into which a bus then crashed. The northbound platform tunnel partially collapsed and was filled with earth and water from the fractured water mains and sewers above, which also flowed through the cross-passages into the southbound platform tunnel. We believe 67 civilians and London Transport staff were killed.

World War II Today has more details and photographs. The incident features in Ian McEwan's novel 'Atonement'. This and the subsequent film both get the date wrong.

London News Online has another, colour, photo of this scene, from a different angle.

This section lists the memorials where the subject on this page is commemorated:
Balham Station bombing

Car bomb planted by the IRA in Hans Crescent, killed 3 police officers and 3 ...