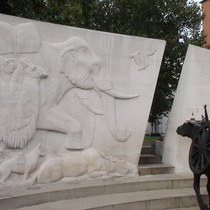 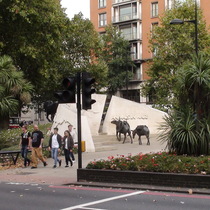 {On the front of the monument:

On the screen wall:}
Animals in war
This monument is dedicated to all the animals that served and died alongside British and Allied forces in wars and campaigns throughout time. They had no choice.

{On the back of the monument:
On the east side:

A large version of the PDSA medal:}
PDSA, For gallantry, We also serve
The PDSA Dickin Medal, the animals’ Victoria Cross, instituted 1943.

{Covering the rest of the screen wall on the east:}
Many and various animals were employed to support British and Allied forces in wars and campaigns over the centuries and as a result millions died. From the pigeon to the elephant they all played a vital role in every region of the world in the cause of human freedom. Their contribution must never be forgotten.

This monument was unveiled on the 24th November 2004 by HRH the Princess Royal KG KT, Patron – The Animals in War Memorial Fund

Unveiled by Princess Anne. We have not created a page for all of the many trustees and donors listed, nor for the parties in the list headed by the Mail on Sunday - their role is not specified. The memorial has its own website and more information is given there, but no mention of E. A. Bowles nor of Cynthia Anne Smith. We ID'd Bowles ourselves but are still struggling with Smith. Perhaps she was related to the trustee, John R. Smith. Can any one help?

No explanation for these two names is given and as far as we can tell, Smith and Bowles are unrelated to the subject of the memorial. Bowles had died exactly 50 years prior to the memorial being unveiled, but then so did a lot of other people, people who were not great uncle to one the trustees, Andrew Parker Bowles.

One thought about this memorial is probably shared with the prostrate donkey - we hope the elephant has second thoughts about where to put that foot.

This is an impressive memorial but many people find it over-sentimental. Like most war memorials it insists we remember the fallen but in this instance they are a nameless troop of dumb animals who "had no choice". But, the men and women who fought, did they have a choice? This memorial to the animals in war makes one question all war memorials and their purpose. Remember so it won't happen again? Or remember, glorify the dead and become inured to the idea of war?

This section lists the subjects commemorated on the memorial on this page:
Animals in War

This section lists the subjects who helped to create/erect the memorial on this page:
Animals in War

Born into an elite horsey family, close to the royals. 1960 commissioned into...

This section lists the other memorials at the same location as the memorial on this page:
Animals in War

Also in memory of the millions of horses killed on service with the British r...