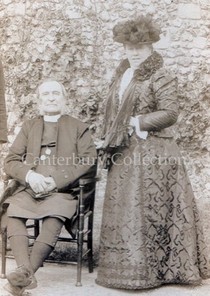 Andrew Behan has kindly researched this woman: Mrs Temple was born as Beatrice Blanche Lascelles on 19 June 1844 in Kensington. She was the eleventh of the twelve children of the Honourable William Saunders Sebright Lascelles (1798-1851) and Lady Caroline Georgiana Lascelles née Howard (1803-1881). Her father was a Member of Parliament and in 1847 was the Comptroller of H.M. Queen Victoria's Royal Household. She was baptised on 24 July 1844 at St Mary Abbots Church, Kensington.

The 1851 census shows her living with her family at Bute House, Campden Hill, Kensington. On the night of the 1861 census she and her widowed mother, together with various siblings were visiting the home of Henry, Lord Taunton and Mary, Lady Taunton at Stoke Park House, Stoke Poges, Buckinghamshire. On the night of the 1871 census she was a visitor at the home of the Marquis and Marchioness of Westminster at Cliveden Mansion House, Taplow, Maidenhead, Berkshire.

In 1885 her husband was enthroned as the Bishop of London and the 1891 census confirms that the family were living at the Bishop of London's Palace in Fulham. In 1897 her husband was enthroned as the Archbishop of Canterbury and the 1901 census confirms they were living at the Archbishop's Palace in Canterbury, Kent. Her husband died on 23 December 1902 at Lambeth Palace. The 1911 census shows she was living with her younger son who was the headmaster of Repton Public School in Derbyshire. Probate records show that she died, aged 70 years, on 2 April 1915 at home at St James Rectory, Piccadilly, London. Probate was granted to her younger son, the Reverend William Temple, her estate totalling £15,923-11s-2d and she was buried in the grounds of Canterbury Cathedral.

This section lists the memorials created by the subject on this page:
Beatrice Temple

Composer and impresario. Born in Kensingston. Immensely successful writer of ...