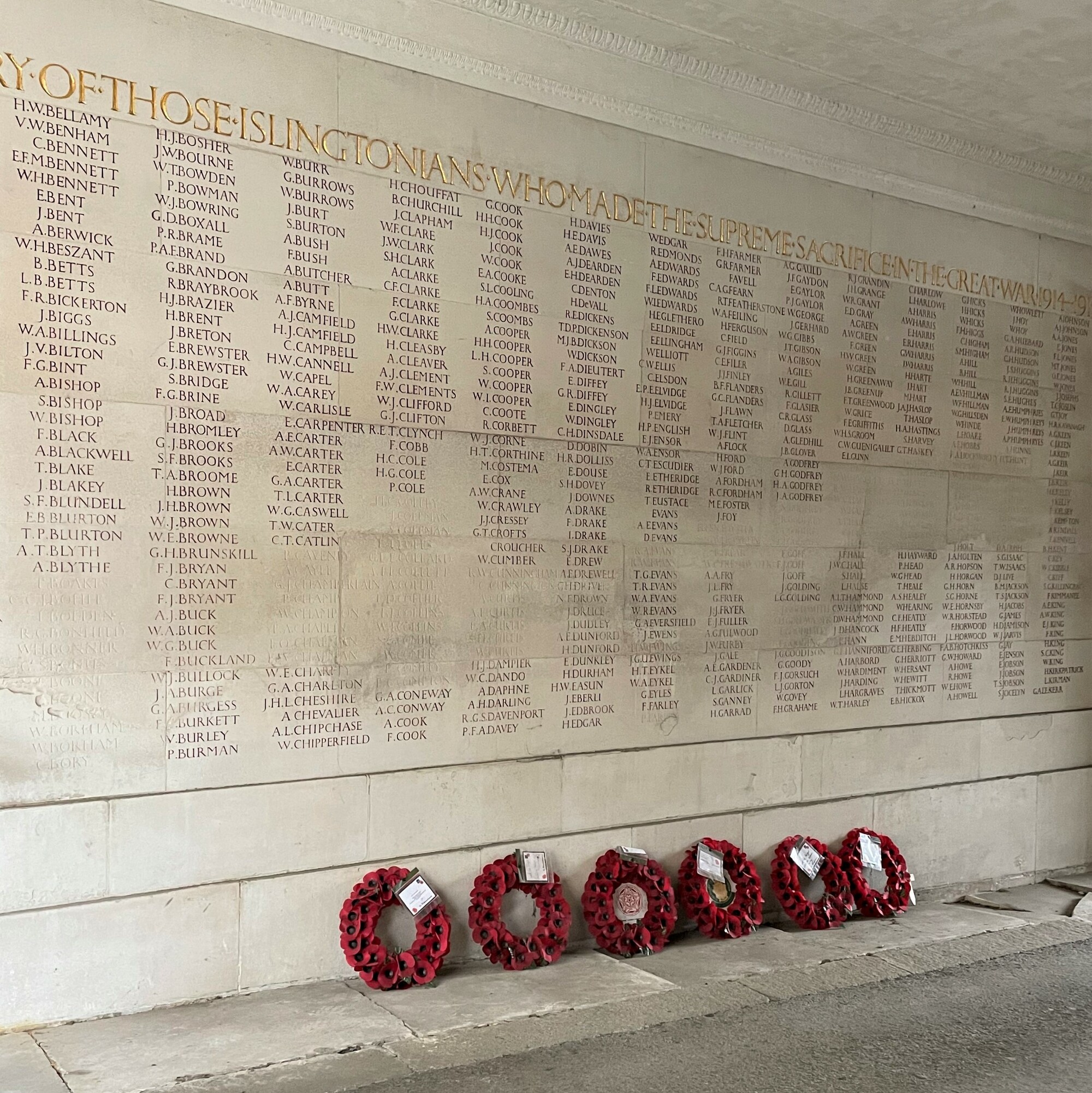 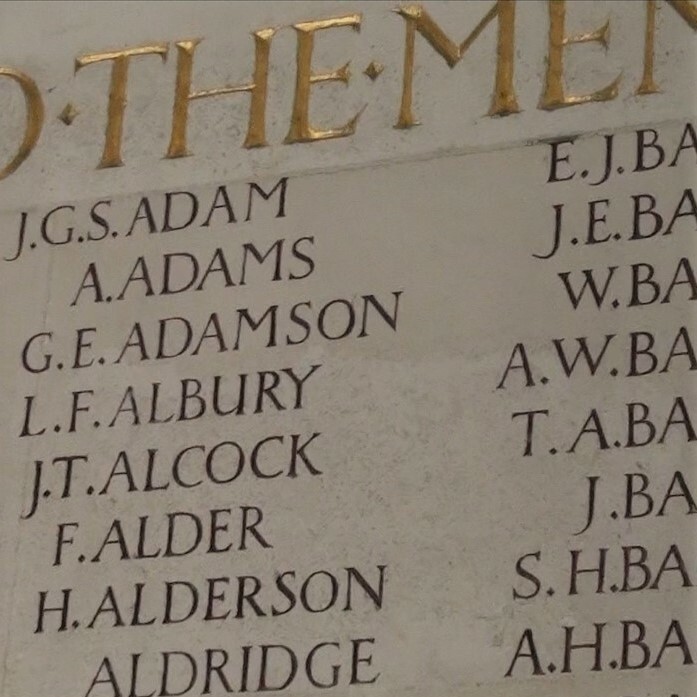 {There is also meant to be a metal plaque, added in November 2016, which we did not see:}
In memory of the men of Islington and Finsbury who died in the service of their country in France at the Battle of the Somme, July - November 1916. Lest we forget.

Through the gates you can see that most of the names are nicely picked out but that some panels are damaged by what looks like damp (as you can see in our photo). We were relieved to see that the Imperial War Museum has already transcribed 1,248 names. However that same page says that there are 1,307 names. The illegible names may explain the discrepancy.

The original 1923 WW1 memorial consisted of the whole Casualty Department building for the Royal Northern Hospital, including this arched passageway and the list of names it contains. The architect was H. Percy Adams, of Adams, Holden and Pearson. The builder: F. C. Minter may be related to E. J. Minter.

See Islington War memorial arch - outside for a photo of the arch entrance into this passageway through the building. It is like a tunnel with gates at each end. The walls of the main part of the tunnel are covered with a list of names as shown in our photo. The memorials relating to the Royal Northern Hospital are housed in a smaller section, at the back, the northern end of the tunnel (possibly added later?).

When the Casualty Department building was demolished (by 1997) this arch was retained in situ, and the plaque on the outside that explained the whole-building nature of the memorial was salvaged and erected in the nearby public garden. The arch-passageway was incorporated into a private residential development. This means that the gates are normally locked, the list of names can only be viewed skew-whiff through the gates, and the memorials at the back are not visible at all.

We've numbered the memorials as follows:

At the back on the west wall:
1. Ifor Williams
2. Islington Victoria Ward

At the back on the east wall:
3. St David’s wing and RNH navigational sign
4. Newbon Ward

After many years of failing to find the gates open we finally gained access on 11 November 2021 when they had been opened for someone to pay their respects. The key-holder said that we could always revisit by asking for the key at the nearby Islington North Library. We also understand that a memorial event is held here annually on Remembrance Sunday, but probably in the nearby memorial garden, so we don't know if the gates to this tunnel would be opened for that event.

This section lists the subjects commemorated on the memorial on this page:
Islington WW1 memorial - Manor Gardens - names

This section lists the other memorials at the same location as the memorial on this page:
Islington WW1 memorial - Manor Gardens - names 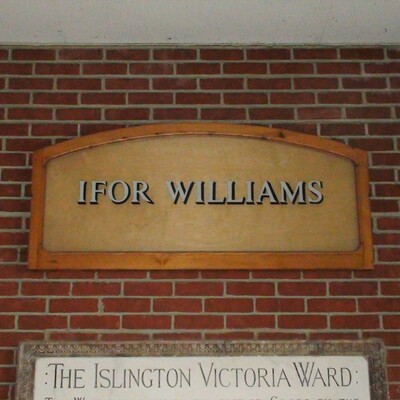 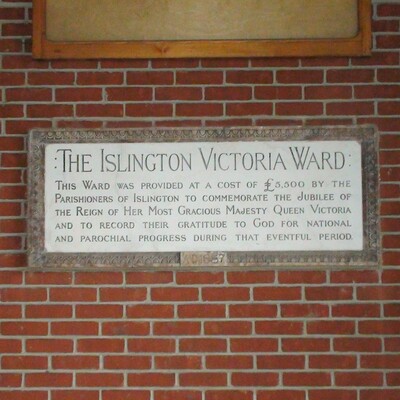 The phrase "gratitude to God for national and parochial progress during that ... 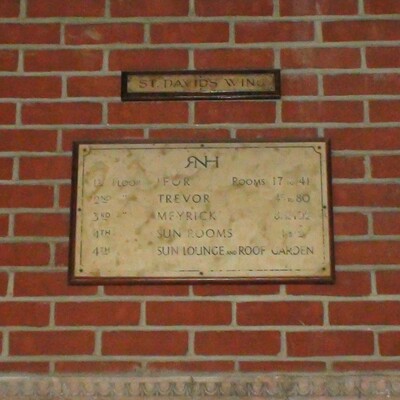 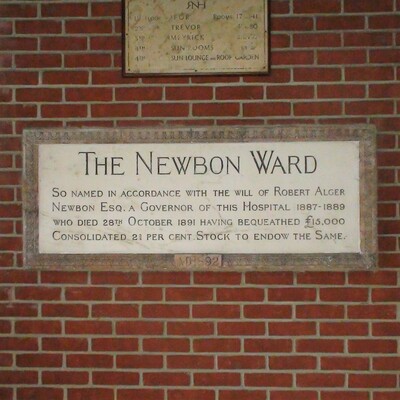 The Newbon Ward So named in accordance with the will of Robert Alger Newbon E... 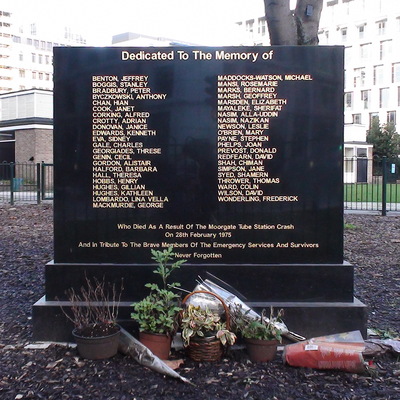 The motivating force behind this memorial, the first to the tragedy, erected 38 years after the event, was historian and writer Richard J... 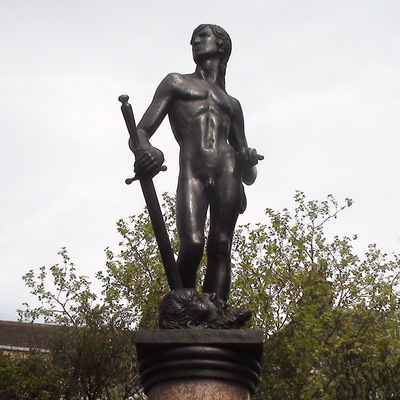 Commissioned to create a WW1 memorial to the Machine Gun Corps Derwent Wood produced a statue of David (post-Goliath decapitation). The o... 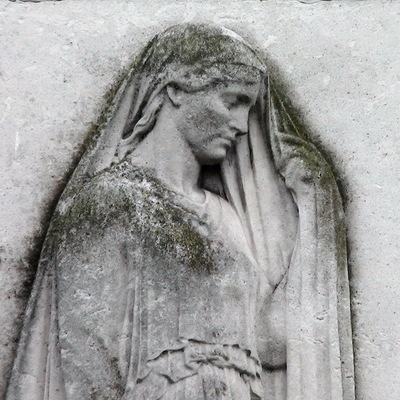 The design of this Portland stone clock tower was chosen through competition by a committee of the Royal Academy from a field of 80. The... 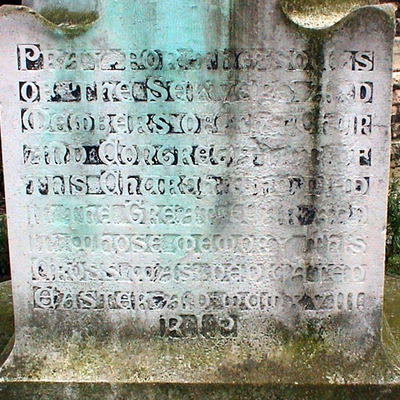 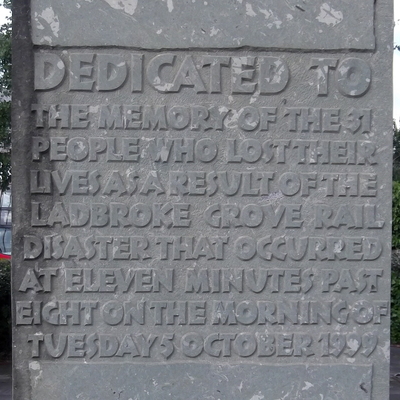 The Sainsbury's plaques are on the wall to the right of the large bush in the centre of the photograph.