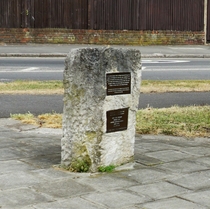 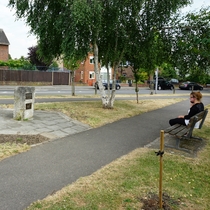 {Top plaque:}
On the 22nd January 1945 at 2.35 pm the last V2 long range rocket to hit Kingston fell near this spot, resulting in the deaths of 8 persons and causing injury to 117 more. A total of 33 homes were destroyed and over 2,000 more were damaged, making it the most severe and widespread incident of World War II in the Royal Borough.
The memorial was erected by the Kingston Town and Royal Park Neighbourhood Committees to commemorate the 50th anniversary of VE Day and VJ Day 1995.

{Lower plaque:}
In memory of those who died as a result of this incident:
Amy Ethel Dormor
Patricia Land
Winifred Gertrude Maton
Mary Read
Vera Styles
and of those persons whose names are unknown.

The plaque says that 8 people were killed but has the names of only five: four women and one 7-year-old girl.

This section lists the subjects commemorated on the memorial on this page:
Last V2 rocket in Kingston upon Thames

This section lists the subjects who helped to create/erect the memorial on this page:
Last V2 rocket in Kingston upon Thames

The oldest of the three royal boroughs in England, it was formed in 1965 by t...