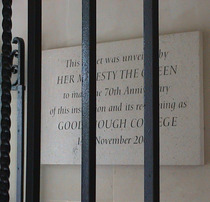 This tablet was unveiled by Her Majesty the Queen to mark the 70th Anniversary of this institution and its re-naming as Goodenough College, 14th November 2001.

This section lists the subjects commemorated on the memorial on this page:
70th Anniversary of Goodenough College

This section lists the subjects who helped to create/erect the memorial on this page:
70th Anniversary of Goodenough College

This section lists the other memorials at the same location as the memorial on this page:
70th Anniversary of Goodenough College