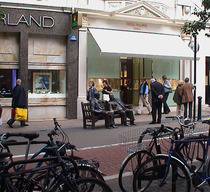 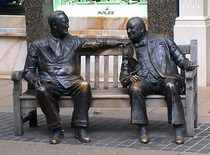 Credit for this entry to:
Trevor Blake

The two seated allies are unidentified at the site but with the assistance of our US consultant, Trevor Blake, we can confidently identify them as, left to right: Franklin D Roosevelt and Winston Churchill.  The plaque is in the pavement to the right of the bronze statue.   This "seated double" belongs to the select group of seated London statues - see Peabody.

From Time Out, November 2008:
Lawrence Holofcener:"....When millions marched against the Iraq War, I placed a black sheet over the statue and sat beside it. I told passers-by: 'This is a protest against the 'special relationship' that Bush and Blair have trashed....."

2016 our colleague, Alan Patient, spotted a near-copy of this statue on Heath Street Hampstead outside the Cato Gallery. The gallery have a platform outside on which they exhibit a sculpture which (Google Street View History suggests) is changed about once a year. The differences are all minor but the Heath Street version is inferior and gives Churchill more the look of a puppy that a bull-dog.

This section lists the subjects commemorated on the memorial on this page:
50 years of peace

This section lists the subjects who helped to create/erect the memorial on this page:
50 years of peace

An American who was born on 23 February 1926 in Baltimore City, Maryland, USA...