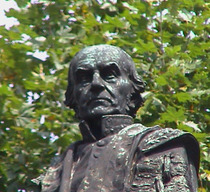 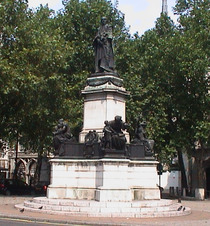 On each corner of the monument there is a sculpture of a seated woman (most with one or more children) representing (clockwise from front) Brotherhood, Aspiration, Courage, Education.

The 1958 film Davy (not very good) has a short sequence towards the end with Harry Secombe and a child sitting on the steps of this monument which at the time was surrounded by road, rather than being part of a larger pavement area as now.

At Bridgeman Images we came across a photo labelled "Maquette for the Statue of William Ewart Gladstone on the Strand, London, c.1905 (plaster)", by Hamo Thorneycroft and held at Leeds Leeds City Museum.  However, the maquette depicts Gladstone in full oratory flow, right arm raised high and right foot forward.  It has similarities to the Bruce-Joy statue at Bow, as if they each show Gladstone in the same speech, captured a few seconds apart. Both unlike this very staid statue on Strand.

This section lists the subjects commemorated on the memorial on this page:
Gladstone statue - the Strand

This section lists the subjects who helped to create/erect the memorial on this page:
Gladstone statue - the Strand

The form of the statue is similar to that of the 'Green Man' carvings in chur...