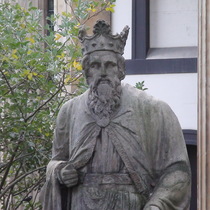 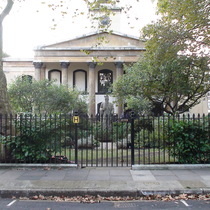 {The gardens are locked so we could not examine the statue or its plinth for any inscriptions.}

Many sites will tell you that this is the oldest outdoor statue in London, being one of a set commissioned by Richard II for Westminster Hall (six of which remain there). Poppycock. Just look at it – the condition alone (ridiculously good for a 600-year old statue) should convince you, but also consider: the contrapposto stance (a slight turn rather than flat on) - not used in the medieval period; the materials – “the whole of the upper part and most of the sides and back are … in Coade stone” - not invented until 1769; and it shows significant visual differences to the Westminster Hall statues (images here and here).

We know the statue was in place in this Square by 1830 because it is shown in an engraving of that date (which, annoyingly, we can’t find on-line). It has a plain back which suggests it was probably designed to stand up against a wall or in a niche. Both hands are now empty but clearly are intended to clutch items such as a sceptre.

The TNRA website quotes Terry Cavanagh who in 2007 put forward a theory explaining the origins of this statue that we find very convincing. Briefly: c.1822 James Bubb carved a pair of statues (Alfred the Great and Solon) for niches on the main façade of the new Manchester Town Hall. He mistakenly made them too big and so carved another pair the right size which were used. This façade with its two statues survives at Heaton Park, where it was re-erected when the building was demolished. You can see that Alfred the Great here.

This left Bubb with two statues available to sell and recoup some of his costs. The similarity between the Manchester Alfred and that in Trinity Square is so Great (pun?) that we are convinced the latter is a version of the former. The mystery is now more: where is the oversized Solon? But this is not Manchester Remembers – finding that statue is someone else’s job.

TNRA don't mention it but at Speel we learn that Bubb worked for Mrs Coade - surely a clincher.

Our main source for this entry is Trinity Newington Residents Association.

2021: The Telegraph reported "The lower half of the statue is believed to date from the Roman era, despite previous estimates it was medieval" and a photo of someone testing or cleaning the statue is captioned "The upper half of the statue - which depicts King Alfred with a crown and robe - was created in the early 19th century". "The lower half is believed to have come from a colossal ancient sculpture, almost certainly dedicated to Minerva, goddess of wisdom and just causes." And the BBC have the same story. No one mentions the similarity with the Bubb statue in Manchester.

Holy Trinity church was built in 1824 but became disused by 1961. In 1973 work was about to start in its conversion to a music hall when it was gutted by a fire. It reopened as Henry Wood Hall in 1875.

This section lists the subjects commemorated on the memorial on this page:
Alfred The Great statue

This section lists the subjects who helped to create/erect the memorial on this page:
Alfred The Great statue