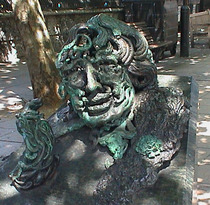 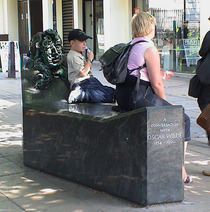 Unveiled by Lucian Holland, Wilde's great grandson, who made the unveiling speech.  He was assisted by Stephen Fry who played Oscar in the 1997 film "Wilde". Jenkins did the inscription carving.

If Oscar has a cigarette in his hand when you see him you are in luck since it has been repeatedly stolen and replaced. In 2004 we heard that there were plans to protect the fag's fag with surveillance cameras. Hambling is particularly peeved since she is an avid smoker herself and sees this vandalism as possibly associated with the anti lobby. She visits Oscar occasionally and cleans out his head where people tend to deposit fag-ends, flowers and letters. She herself has furnished it with a starfish and a moon, in reference to the quote.

We think this location was chosen for its proximity to theatreland, where some of Wilde's plays were first performed, at the Theatre Royal, Haymarket, the other side of Trafalgar Square.

This section lists the subjects commemorated on the memorial on this page:
Oscar Wilde reclining

This section lists the subjects who helped to create/erect the memorial on this page:
Oscar Wilde reclining