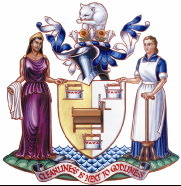 Their coat of arms shows two women; one dressed as a Grecian godess, the other in a Victorian style uniform but both engaged in the labour of laundry. In contrast the 'about us' page of their website (2013) show four grinning officers of the Company in their robes - all men. Mmm.

Three years after the first meeting this group was formally constituted in 1960. Yes, 1960 - we didn't get the century wrong - this is a very young guild. Full livery status granted 10 March 1978.

This section lists the memorials where the subject on this page is commemorated:
Worshipful Company of Launderers

Originally an association of fur traders, it is now an educational and charit...

Worshipful Company of Glaziers and Painters of Glass

The Guild of Glaziers (who made glass) existed in 1328 and received a Royal C...