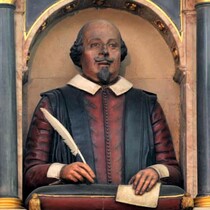 2021: We had to change the image on this page because new information had come to light. The Guardian reported: "The effigy above his grave in Holy Trinity church in Stratford-upon-Avon was thought to have been installed several years after his death in 1616 and, as a posthumous memorial, not an actual likeness. .... But new research has found that the bust was in fact modelled from life by a sculptor who knew him."