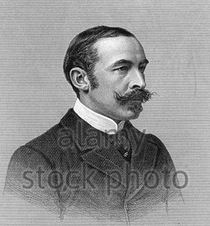 Born of British stock in America as William Lehman Ashmead-Bartlett. On his father's death the family moved to England in 1852.

In 'The Story of Holly Lodge' by Margaret Downing, March 2009, we learn: "He first met Angela {the massively wealthy Baroness Angela Burdett-Coutts} when he was ten, and she presented the prizes at his school in Devon. Deeply  impressed by his recitation there, she helped fund his education at Highgate School and then at  Oxford."

On leaving university in 1877 he became secretary to Angela who, despite being 37 years his senior, married him in 1881 and he took her name. After her death he continued her philanthropic work. Chairman of the Highgate Committee for enlarging Hampstead Heath. MP for Westminster 1885 until his death at home, Holly Lodge, Highgate.

He was younger brother to the politician Ellis Ashmead-Bartlett, who had two sons: Ellis Ashmead-Bartlett (the war correspondent) and S. Burdett-Coutts. Interesting that one son took his wealthy uncle's name and the other didn't. (ref: King's College London), we wonder if "S" was William's heir?

The circumstances in which an inheritance by a woman causes a man to change his name are covered by Anthony Trollope, in his 1879 novel ‘Cousin Henry’. On p64 Indefer Jones is struggling to decide whether he should follow tradition and leave his wealth to Henry, a distant male heir, or follow his heart and leave it to Isabel Brodrick, a much loved niece who is looking after him. His lawyer reports a conversation “He told me that he thought it right to keep the property in the direct line of his family. I endeavoured to explain to him that this might be sufficiently done though the property were left to a lady, if the lady were required to take the name, and to confer the name on her husband, should she afterwards marry.”

This section lists the memorials where the subject on this page is commemorated:
William Burdett-Coutts

These improvements were carried out with trust funds in memory of the late Ri...

Donor of a mosaic to the Red Cross Garden. She belonged to a public-spirited ...