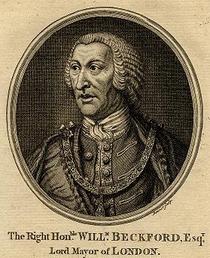 Lord Mayor of London 1762 and 1769. Born Jamaica. Inherited a fortune from the family slave-based business. Lived at 22 Soho Square (the house has been demolished) from 1751 until his death while travelling from the family seat at Fonthill to London. His only legitimate son, William Beckford the younger, was born in Soho Square in 1759 and went on to write the gothic novel, Vathek. Guildhall contains a statue to Beckford Sr, at the east end of the south wall.

2020: Following the Black Lives Matter protests there are reports that the Beckford Primary School in Hampstead will change its name. And calls for the statue in the Guildhall to be removed.

2021: The statue in the Guildhall will be "re-sited and replaced with a new work". A few months later: Beckford gets a stay of execution. October - there was a vote to retain the statue and just add a plaque.

2022: Lost London has an interesting post about this anti-abolitionist.

This section lists the memorials where the subject on this page is commemorated:
William Beckford, Alderman

Lord Mayor in 1967.  Born Gloucestershire but brought up in Fulham.  Left sch...