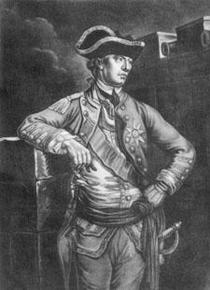 A professional soldier who served with distinction in America, at both the siege of Louisburg and the capture of Quebec in 1759. He was Commander-in-Chief of the British Army during the first part of the American War of Independence. MP for Nottingham from 1758 to 1780, Governor of Berwick-on-Tweed in 1795, and from 1805 until his death, Governor of Plymouth. One of his older brothers was Admiral Earl Howe, who was responsible for the sea victory the Glorious First of June, in 1794.

Buried at St Mary the Virgin, Twickenham alongside his wife Frances, daughter of Lady Anne Connolly, of Twickenham.

This section lists the memorials where the subject on this page is commemorated:
William, 5th Viscount Howe

Founded as part of the volunteer force sponsored by the Highland Society of L...