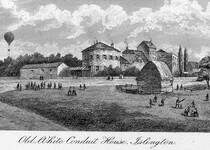 Originally part of the water supply to the Greyfriars Monastery, Newgate Street. See British History 1 and British History 2 for details. The same water was also used to supply Charterhouse from the 1400s to 1652 when Charterhouse decided to use the New River water instead.

The source of the water was a spring in Barnsbury, named for the white stone housing built in 1641. From the 1730s the site became a leisure resort with a tea-house and gardens, centred on the White Conduit House. This was rebuilt but finally demolished in 1849.

The image shows the water supply house in front of a distinctive round building which was part of the leisure complex and can be seen in a number of views from that time. The location of White Conduit House was the north-east corner of Barnsbury Road and Tolpuddle Street with the gardens stretching eastwards to what is now Cloudsley Road, though earlier they had reached all the way to what is now Liverpool Road. The Victorian pub building there now, Little Georgia (which keeps changing it's name so it's barely worth naming it), has "White Conduit House" in large lettering at the cornice.

The fields opposite the White Conduit House, to the west, were used for cricket from the 1770's. A club that formed here moved to Lord's cricket ground and went on to become the Marylebone Cricket Club.

We are aware that most of this information has nothing to do with the Rugby Street area but it's interesting and there's no memorial at the site of the White Conduit House to which we could attach it.

This section lists the memorials where the subject on this page is commemorated:
White Conduit

The nice lady in the shop told us that it is a 2 metre square white marble we...

Ice was cut in Norway, transported by ship to London, stored and then distrib...

Canine food specialists and operators of the "largest dog biscuit factory in ...

The name was first recorded in the 15th century, and maps of this period show...

Public House. One of four in the Camden area with 'castle' in its name. The s...

One of the two sources of the Tyburn river, the other being in the grounds of...