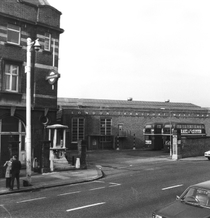 Situated in Greengate Street, West Ham, this tram depot opened in October 1906, then housed trolleybuses from June 1937 until April 1960. Motorbus operation commenced in November 1959 until October 1992 when the garage closed. It has since been demolished.

West Ham Council ran trams 21 hours a day, from 3.30am, until 12.30am, and every day of the year. In 1935 London Transport began to replace trams with trolley and motor buses. By 1937 trams had disappeared from all local routes. In their turn, trolleybuses began to be withdrawn in 1959, and were replaced by Routemaster buses.

The site has been redeveloped for housing and the road running through the estate is named Routemaster Close.

The Routemaster double-decker bus is probably the most popular of London buses, particularly with its hop on/hop off open rear platform. They began to be withdrawn from service in September 1982, and the last regular services on route number 159 ended in December 2005. They continued to run on 'heritage routes' for several years afterwards, and can still be seen in many cities around the world.

This section lists the memorials where the subject on this page is commemorated:
West Ham tram and bus depot

The first bridge crossing the river here was constructed in wood and opened i...