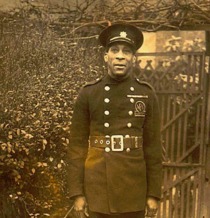 Soldier and Fireman. Born in Trinidad, he was one of the first black men to join the British Army. In WW1, he earned a reputation for throwing bombs back over enemy lines and was nicknamed the 'Coconut Bomber'. He was enlisted as a rifleman in the Middlesex Regiment and he fought in the battles of Loos, the Somme and in the Dardanelles, being awarded a Meritorious Service Medal (MSM). An electrician by trade, at the start of WW2 he joined the National Fire Service and saved many lives during the WW2 Blitz. In 1921 and again in 1935 he was taken back to Trinidad to assist in the recruitment drive. In 1931 he joined as one of the founder members of the League of Coloured Peoples, the most influential civil rights organisation of the era and one of the first organisations to take care of the needs of Britain's black community, becoming a member of its executive committee. He was awarded a British Empire Medal (BEM) in the 1944 King's Birthday Honours List, and later founded a local branch of the British Legion. Died at King's College Hospital.

Our colleague, Andrew Behan, states that various dates of birth are given for this man. In his Wikipedia entry (as at March 2021), they show two different birth dates, 1 August 1890 and 1 August 1891. In the 1939 England and Wales Register he is shown as a widower living at 29E Lewis Trust Building, Warner Road, Camberwell, an exhibition attendant & messenger, whose Auxiliary Fire Service Number was 7562. In this register his date of birth was recorded as 1 August 1891. However, when his death was registered in the Lambeth registration district the registrar was advised his date of birth was 2 August 1890. We have opted for the 1939 recorded date.

This section lists the memorials where the subject on this page is commemorated:
George Arthur Roberts