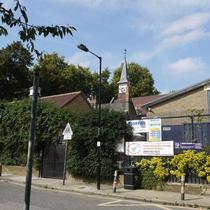 This down at heel backwater to the east of the Tower of London, has an unexpectedly rich history. The area around it was generally known as Wellclose and in 1686 it became part of the Liberty of the Tower. It was mentioned by Daniel Defoe as having a well in the centre. A Danish church designed by Caius Gabriel Cibber was built here in 1696. In 1787 a theatre called the Royalty was erected. This burned down in 1828 and was replaced by the Royal Brunswick Theatre which collapsed shortly after opening. Spitalfields Life has some wonderful images.

The Neptune Street prison, also known as 'The Sly House' also occupied the site. See Spitalfields Life for some grafitti from a debtors' cell here. The now threatened Wilton's Music Hall, built in 1858, stands in Grace's Alley just off the square. Currently there are two schools here, the Shapla and St Paul's Whitechapel (pictured right), which unusually has a spire.

This section lists the memorials where the subject on this page is commemorated:
Wellclose Square, E1

Architect.  His father and grandfather were both architects with the name Tho...