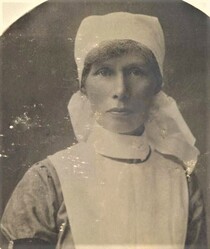 Nursing Sister Alice Violet Hallam was the eldest of the four children of John Bough Hallam (1835-1909) and Alice Aldersley Hallam née Adam (1845-1910). Her birth was registered in the 2nd quarter of 1871 in the Hampstead registration district.

In the census that was taken on 2 April 1871 she is shown as aged under one month living at 12 Hampstead Hill Gardens, with her parents, her maternal grandmother Sarah Adam née Olding (1816-1894), together with a cook, a housemaid and a monthly nurse. Her father was listed as a tea merchant. On 4 June 1871 she was baptised in the parish of Oakham, Rutland, where the baptismal register shows the family living in Hampstead.

In the 1901 census she is listed as residing at 42 St John's Wood Park, Hampstead, with her parents and sister Edith, together with a cook and a housemaid. Electoral registers in 1914 show her listed at 10 Belsize Lane, Hampstead.

Commonwealth War Graves Commission records show her as a Nursing Sister with a service number of 541 serving in the Voluntary Aid Detachment at No.18 General Hospital that was located in Camiers, France. However, their records also show her as a member of the St John Ambulance Brigade. She entered France on 2 June 1915 and remained there until 3 July 1916. She returned to France on 18 October 1916 and died, aged 45 years, as a result of an illness contracted on service. She was buried in Plot 1, Row A, Grave 77, in the Étaples Military Cemetery, Étaples, France.

Probate records confirm that her home address had been 71a King Henry's Road, Hampstead. Probate was granted on 14 April 1917 to her sister Lilian and her solicitor Ernest Addington Adam and her effects were initially valued at £8,383-9s-0d but were subsequently resworn as £8,104-17s-9d.

This section lists the memorials where the subject on this page is commemorated:
Violet Hallam

On the Just Giving page: "The names on the beautiful but fading current memor...