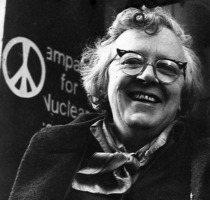 Margaret Doreen Eames was born on 8 February 1910, the second of the three children of Frank Eames (b.1877) and Evelyn Rose Eames née Pitman (1874-1945). On 10 April 1910 she was baptised at St Michael's Church, 60 Elmwood Rd, Chiswick, where the baptismal register shows the family residing at 51 Wolseley Gardens, Chiswick and lists her father's occupation as an organist. As the 1911 census shows his occupation as a stockbroker's clerk, it is probable that the vicar recorded him as being the organist of his church.

Our picture source and her Wikipedia page gives a biography of her life including the fact that she was the first General Secretary of the Campaign for Nuclear Disarmament and in 1964 was elected as a Labour party councillor in the Camden Ward of the newly formed London Borough of Camden.

In the 1939 England and Wales Register she is shown as living at 'Rousham', Westbury Terrace, Westerham, Kent, with her husband and children. Her husband is listed as a journalist whilst she is recorded as 'unpaid domestic duties'.

She died, aged 71 years on 16 April 1981, her death being registered in the Camden registration district and was buried on 24 April 1981 in Hampstead Cemetery, Fortune Green Road, London, NW6 1DR.

This section lists the memorials where the subject on this page is commemorated:
Peggy Duff

Administrator. He was secretary to King Henry VIII and Cardinal Wolsey, and t...

Founded in 1681 by a land charter granted by Charles II to William Penn.