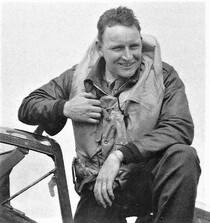 On 6 March 1942 he joined the Royal Canadian Air Force as a sergeant and came to England on 28 August 1942 where he was assigned to No.71 Eagle Squadron based at RAF Kirton-in-Lindsey, Lincolnshire. On 29 September 1942 the squadron, together with the other two Eagle squadrons, was transferred to the US Army Air Forces, becoming the 334th Fighter Squadron of the 4th Fighter Group and was based at RAF Debden. On 9 September 1943, while returning to RAF Debden from a bomber escort mission, his engine failed in his Republic P-47 Thunderbolt aeroplane forcing him to parachute into the English Channel. He spent 43 hours in the water before he was rescued.

He was transferred to the 362nd Fighter Group on 23 November 1943 until 1944. He left the air force holding the rank of Major and was awarded the Air Medal with 3 oak leaf clusters, the Distinguished Flying Cross, the European-African-Middle Eastern Campaign Medal, the Silver Star and the World War II Victory Medal.

This section lists the memorials where the subject on this page is commemorated:
Vernon Boehle