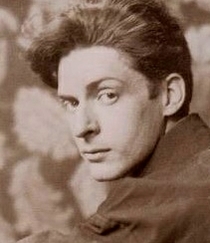 Artist and designer. Born in Great Falls, Cascade County, Montana, USA. As an art student, he was sponsored by Professor Joseph McKnight, from whom he adopted his middle name. He moved to Paris where he met and subsequently married the textile designer Marion Dorn. At the outbreak of World War I, they moved to London. Here he made his name designing posters for the London Underground. In 1940 they moved to New York City where he produced posters, for American Airlines primarily, until his death.

This section lists the memorials where the subject on this page is commemorated:
Edward McKnight Kauffer

Engraver, caricaturist and illustrator, best known for his political caricatu...

Born Edinburgh. Painter and poet, closely associated with the Pre-Raphaelite...