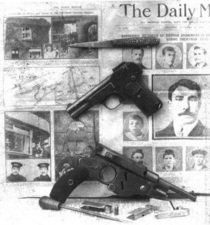 One winter Saturday morning two armed Russian/Latvian anarchists, Paul Hefeld and Jacob Lepidus, attempted to seize the wages’ cash (£80) being delivered to the Schnurmann Rubber Factory in Chesnut Road, Tottenham.  The sound of bullets was heard at the (extremely) nearby police station and officers ran to the site.  The robbers ran away down Chesnut Road, firing at the pursuing policemen; some on foot, some in a car.  Follow the chase on the map at Tottenham-Summerhill Road.  At Mitchley Road Hefeld stopped to reload his gun.   One of the pursuing drivers tried to run over the gunmen but only succeeding in crashing the car and injuring those inside.  Ralph Joscelyne, 10 years old, was caught in the cross-fire and killed.  One of the police borrowed a gun from a member of the crowd that had gathered but failed to hit either of the robbers who ran on towards Tottenham Marshes.  Constables Tyler and Newman attempted to cut them off by running behind a tall fence.  Tyler met them at the end of the fence and shouted "Come on, give in, the game's up.”  But Hefeld shot him in the head.  Constable Newman stayed with the dying Tyler while the gunmen ran on, reaching and crossing the River Lea.  The chase carried on, along the south side of the Banbury Reservoir to Chingford Road where they hijacked a tram.  The police commandeered another tram and 40 officers boarded.  A horse-drawn carriage driven by another officer crashed when Hefeld shot the horse.  Being told there was a police station coming up the gunmen jumped tram and took over a milk cart, by shooting its driver.  They drove this until they crashed it, when they hijacked another horse cart.  They had a crowd of followers led by a motor car carrying armed police who were exchanging fire.  Others were on horseback, on bicycles, on foot; some wielding cutlasses, others brandished truncheons.  A woman throw a potato.  The followers included footballers, labourers, duckshooters and gypsies.  Hefeld and Lepidus crashed again at Fulbourne Road and Wadham Road (where the North Circular now is).  They ran towards the River Ching and Lepidus climbed a tall fence.  Hefeld failed to get over and attempted to shot himself but survived (but was not able to continue running, you’ll be relieved to hear).   Lepidus ran on into Hale End Road and into the end house, Oak Cottage, where lived the Rolstone family.  They got out as the house was surrounded by police and a gun battle ensued during which Lepidus successfully shot himself.  This was near the Royal Oak pub where none of the buildings of that date remain.  We have read that the pub itself was built on the site of Oak Cottage.

The above is, mainly, a condensed version of the story told at History by the Yard and the detailed description given by Wikipedia who summarise with: “The incident lasted more than two hours, covered a distance of six miles with an estimated 400 rounds fired by Helfeld and Lepidus. Twenty-five casualties were reported, two fatal and several serious.“  The two deaths were Constable Tyler and the little boy, Ralph.  Lepidus died at the scene and Hefeld (or 'Helfeld') died in hospital on 12 February, both at their own hands.

5 minute Youtube with photos of many of the buildings involved.  12 minute film with recreation of the event.

This section lists the memorials where the subject on this page is commemorated:
Tottenham Outrage

The wording on the plaque does not make it clear that Lepidus committed suici...

The building, situated close to the church of St Mary the Virgin, was used by...

Born as Thomas Henry Bingham on 13 October 1933, his birth was registered in ...