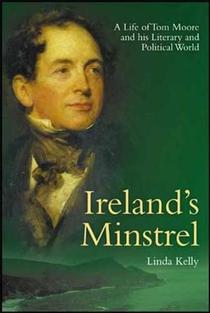 Iris poet, singer and songwriter. Born Thomas Moore at 12 Aungier Street, Dublin. He came to London to study law at the Middle Temple and befriended many prominent people. In 1803, he was appointed registrar to the Admiralty in Bermuda, but found his work too light and moved to America. Returning to Britain, he became a close friend of Lord Byron, and after Byron's death, was partly responsible for burning his memoirs. His works include the lyrics for 'The Minstrel Boy' and 'The Last Rose of Summer'. Died at his home, Sloperton Cottage near Calne in Wiltshire, where he had moved with his wife in November 1817.

A sample of one of his ballads:

'Tis the last rose of summer
Left blooming alone;
All her lovely companions
Are faded and gone.

This section lists the memorials where the subject on this page is commemorated:
Tom Moore

Oboist. Born Léon Jean Goossens in Liverpool. Son of Eugene Goossens.  At the...

SongLink International is a tipsheet providing leads to music publishers and ...

ComposerWith W. S. Gilbert wrote the Savoy Operas, including The Mikado and T...