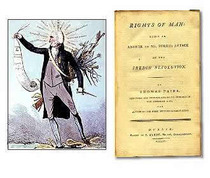 Revolutionary. Born Thetford, Norfolk. Emigrated to the British American colonies and took part in the American Revolution. Travelled to France in 1781 and became sufficiently involved in politics and government there to be imprisoned for a few months. Not approving of Napoleon he returned to America at Thomas Jefferson's invitation but he was not successful and died there in penury, at 59 Grove Street in Greenwich Village, New York where he was being nursed in the home of the widow of an old friend. In 1819 an admirer had his remains dug up and brought back to England, but they were then lost.

We learn, at The Great Wen, that Paine was also a bridge-builder, albeit the only one he built went nowhere on a bowling green near Lisson Grove.

This section lists the memorials where the subject on this page is commemorated:
Thomas Paine

This section lists the memorials created by the subject on this page:
Thomas Paine

Politician. Born at 7 Queen Square, Liverpool. Entered parliament in 1828. He...

Treasurer of the British Legion Hornsey in 1929.

Eleanor Harvey was born on 2 September 1907 in Merton, Surrey, (now the Londo...