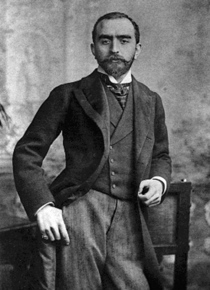 Born in what is now Istanbul. His father was already in the business of oil import/export and Calouste became immensely wealthy in this field.

Took a degree at Kings College, London and here, 1892, married Nevarte Essayan. 1897 established an office in London. 1902 acquired British citizenship. But 1942, while living in Vichy, France, he fell out with the British government and moved permanently to Lisbon. In 1956 created the Calouste Gulbenkian Foundation, a private foundation based in Portugal which continues to promote arts, charity, education, and science throughout the world.

Asbarez is a useful source.

This section lists the memorials created by the subject on this page:
Caloust Sarkis Gulbenkian

To the everlasting and pious memory of his beloved parents Mahtesi Sarkis and...

1st Earl of Iddesleigh. One of the Secretaries to the Commissioners for the ...

Prime Minister of Australia, 1941.  Born and died in Australia.