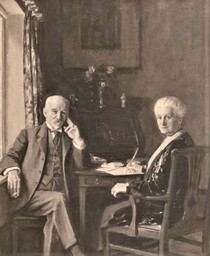 Studied at the Royal School of Mines. Joined his father's chemical supply business, based in Battersea in 1873. Churchwarden of St Andrew-by-the-Wardrobe in 1901. It's possible that the church warden of St Andrews was actually this man's father, Thomas Whiffen (1819-1904), but he would have been 80, so we think not.

Thomas Joseph Whiffen was born on 8 September 1850 in Camberwell, Surrey, the second of the five children of Thomas Whiffen (1819-1904) and Faith Whiffen née White (1815-1890). In the 1851 census he is shown living at 2 Union Cottage, Commercial Road, Camberwell, with his parents and elder sister, Emma Faith Whiffen (1849-1924), together with a female general domestic servant. His father is described as a clerk, coal trade.

The 1861 census shows him residing in Lombard Road, Battersea, with his parents, four siblings: Emma, William George Whiffen (1852-1934), Mary Frances Whiffen (1854-1891) and Alfred Herbert Whiffen (1855-1893), together with a female house servant. His father was listed as a manufacturing chemist.

On 27 April 1876 he married Jessie Ann Hardy (1850-1934) at St Andrew's Church, Freeman Street, Great Grimsby, Lincolnshire and they had nine children. When their eldest daughter Jessie Faith Whiffen (1877-1961) was baptised on 13 April 1877 at St Paul's Church, Clapham it was realised he had not been baptised as a child and consequently he was baptised there, aged 26 years, a week later on 20 April 1877. The baptismal records show him as a manufacturing chemist residing at 2 Pensbury Terrace, Clapham.

The 1881 census confirms that he was still occupying 2 Pensbury Terrace, Wandsworth Road, Clapham, with his wife, their three children, Jessie, Thomas William Whiffen (1878-1922), and Mabel Maria Whiffen (1880-1925), his mother-in-law Maria Hardy née Goodman (1820-1893), together with a female house servant and a nursemaid. His occupation was recorded as a manufacturing chemist.

In the 1891 census he was still being described as a manufacturing chemist residing at 'Harefield', Viewfield Road, Wandsworth, with his wife, seven of their children: Jessie, Mabel, Harold, George, Olive, Stanley and Dorothy Muriel Whiffen (1891-1982), together with a governess, a nurse, a cook and a housemaid.

When their son Noël Hardy Whiffen (1894-1982) was baptised on 13 June 1895 at St Andrew-by-the-Wardrobe the baptismal records show that his father was the senior churchwarden there. Noël was born on Christmas Day in 1894 which probably accounts for his first forename.

The 1901 census shows his occupation and address to be the same as in the 1891 census and that he was living there with his wife, eight of their children: Jessie - who was recorded as a school mistress, Thomas - a Lieutenant in the 27th Inniskilling Infantry, Mabel, Harold - a science student, Olive, Stanley, Dorothy and Noël, together with a cook, a parlour-maid and a housemaid.

When the 1911 census was compiled he described himself as a manufacturing chemist residing at Cerris House, 69 West Hill, Putney, with his wife, six of their children, Jessie -secretary at East Putney High School, Mabel, George, Olive, Stanley and Dorothy, together with a cook, a parlour-maid and two housemaids.

Our image was taken from an ancestry.co.uk member's public family tree and is a 1926 portrait of him and his wife.

Probate records list him as of both Cerris House, West Hill, Putney and Barn Rocks, Aldwick, Pagham, Sussex. Their register confirms that he died, aged 80 years, on 12 April 1931 at Cerris House and that when probate was granted on 30 June 1931 to two of his sons, George and Stanley, together with his solicitor, Herbert Dering Haselwood, his effects totalled £133,133-2s-4d. It was subsequently resworn as £134,199-17s-4d.

He was buried in Central Drive at the Putney Vale Cemetery and Crematorium, Stag Lane, London, SW15 3DZ.

This section lists the memorials created by the subject on this page:
Thomas Joseph Whiffen

The alterations to this churchyard were carried out in the year AD 1901. The...

Born as Millie Haring on 8 April 1922 her birth was registered in Shoreditch....

Clerk of the Carpenters Company in 1956. Architects: Whinney, Son and Austen...