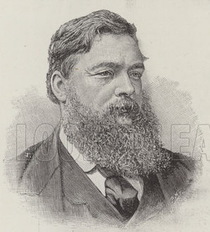 Andrew Behan has kindly carried out some research on this man, and found our picture for us:

Thomas Eccleston Gibb was born on 21 October 1838 in Liverpool, Lancashire, the son of James Gibb and Jane Gibb, nee Spencer. His father was a wood turner. He was baptised on 11 November 1838 at Holy Trinity Church, Liverpool and the family were living at Christian Street, Liverpool. They were still there at the time of the 1841 census. The 1851 census shows him, aged 13, living at 18 Grove Place, Kirkdale, Liverpool, with his parents and younger brother James and sister Jane. His occupation was shown as Apprentice to a Brush Maker.

The 1861 census shows him lodging at 11 Florence Street, Islington, London, and his occupation is recorded as Brush Maker (Sanitary). He was initiated as Freemason into the Mount Moriah Lodge No.40 on 25 January 1877 and was living at this time at 16 Lady Margaret Road, Kentish Town. At some point he married a Mary Humphrey who was born in Shoreditch and the 1881 census shows them living there and giving his occupation as Clerk of Guardians of St Pancras & Vestry Clerk. In 1885 he was elected as a Liberal Member of Parliament for St Pancras East, but lost his seat at the following general election in 1886 having, according to Hansard, made just three speeches in the House of Commons.

He was a founding member of two other masonic lodges, Derby Allcroft Lodge No.2168 in July 1886, which met in Camden Road, Islington, and Hampden Lodge No.2427 in July 1892, which met in St Pancras. The 1891 census shows him and his wife still at 16 Lady Margaret Road and his occupation is recorded as Alderman L.C.C. (Vestry Clerk Par St Pancras). He died on 6 June 1894, aged 55 years and his burial service took place on 9 June 1894 at St Pancras Parish Chapel. Probate was granted and his estate amounted to £10,931-10s-5d.

The Picture source (at root the Illustrated London News, 16 June 1894) adds that Gibb had been one of the editors or managers and part-proprietor of the Liverpool Mercury.

This section lists the memorials where the subject on this page is commemorated:
Thomas Eccleston Gibb

This section lists the memorials created by the subject on this page:
Thomas Eccleston Gibb

Effendi, or Efendi, is merely a title of nobility and the name Sidly may well...