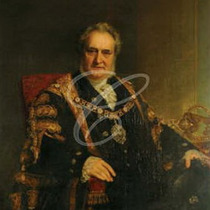 Alderman and Lord Mayor of London, 1869 - 70. Typefounder and and punchcutter, credited with cutting the first Clarendon, a fat typeface with thick slabs, the first ever registered typeface.

The Fann Street Foundry was started by Robert Thorne in 1794 and bought by William Thorowgood in 1820.

In 1838 Besley was taken into partnership in Thorowgood and Co., having been employed as a traveller there since 1826. He worked with Thorowgood until the latter's retirement in 1849 when Besley bought the firm and it became Besley and Co. When Besley created Clarendon in October 1845 he had it registered under the recently passed Ornamental Designs Act of 1842 but the typeface became so popular that its rights were soon broken by people creating knock-offs, though Clarendon is still known as the first Registered typeface. Besley retired from the type-founding business in 1861. The firm became Reed & Fox in 1866 and closed in 1906.

Adeinnelson has fully researched this man and gives his family tree. He was born in Exeter and joined the Fann Street Foundry in 1820. Married Eliza Courtney in 1821. Died at his home in Wimbledon Park.

This section lists the memorials where the subject on this page is commemorated:
Robert Besley

This plaque surely should have been designed with the Clarendon typeface, jus...

This drinking fountain was erected in 1878 in memory of Robert Besley, who ha...