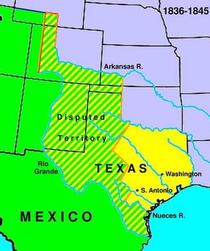 After Texas won its independence from Mexico in 1836, Britain was one of the first countries in the world to recognize the Republic of Texas as a nation.

From Statesman: The United Kingdom enjoys a special relationship with Texas. Brits were there at the beginning: Richard Ballantine of Scotland, William Blazeby of England, Samuel Burns of Ireland and 23 others born in the British Isles crossed that line in the sand drawn by Col. William Travis at the Alamo. And Britain was one of the few countries in the world to recognize the new republic.

This section lists the memorials where the subject on this page is commemorated:
Texas

The plaque was erected on the initiative of Sir Alfred Bossom MP, then presid...