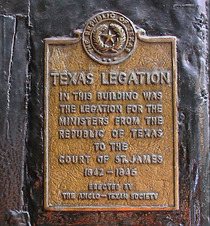 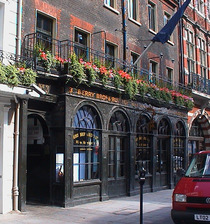 Around the 'Lone Star' and laurel wreath at the top:}
The Republic of Texas

{Followed by:}
Texas Legation
In this building was the legation for the ministers from the Republic of Texas to the Court of St. James, 1842 - 1845.
Erected by the Anglo-Texan Society.

The plaque was erected on the initiative of Sir Alfred Bossom MP, then president of the Anglo-Texan Society. It was unveiled by former Texas governor Price Daniel, Sr.  Also present were Graham Greene, of the Society and Tony Berry, a descendant of Berry Bros. & Rudd, the wine merchants next door who were landlords the Texas legation.  Note that ambassadors to Britain are officially ambassadors to the Court of St. James's which includes the monarch and a group of diplomats.

The plaque is in the passage-way to the left of building. Some good information about this plaque and the location at Unique Places.

The paintwork on the whole ground floor of this building, the oldest wine shop in London, has an aged quality which is either deliberate or evidence of centuries of painting without sufficient preparation. We visited again in July 2012 to see a team of painters working on the frontage, applying yet another layer.

2013: We read that another plaque has been presented, of similar shape to the original and reading: "Legation of the Republic of Texas: From 1836-45, the Republic of Texas and Great Britain pursued diplomatic and military relations. Texas opened a legation on this site in 1842. Great Britain opened a consulate in Houston.” 2014 - we looked round but could not see it - perhaps it's been erected inside the building.

2019: There is another plaque at the site of the Texas Legation in Paris, at 1 Place Vendome.

This section lists the subjects commemorated on the memorial on this page:
Texas Legation

After Texas won its independence from Mexico in 1836, Britain was one of the ...

This section lists the subjects who helped to create/erect the memorial on this page:
Texas Legation

Founded in London by author Graham Greene, its founding president.  The Handb...