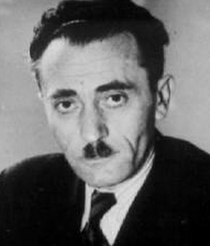 Politician. Born in Borowica, Poland. He became involved in the Jewish labour movement (Bundism), and in 1917, represented Chełm at the first Bundist convention in Poland. He was invited to serve as secretary of the Trade Union of Jewish Metal Workers and in 1924, was elected to the Bund's Central Committee.

Imprisoned after the German occupation of Poland, he was smuggled out of the country and travelled to Belgium and the United States. He arrived in London in 1942, joining the National Council of the Polish Government in exile, and speaking on British radio about the fate of the Jews in Poland. When he heard of the deaths of his wife and son in the Warsaw ghetto, he committed suicide as a protest against the indifference and inaction of the allied governments in the face of the Holocaust. He killed himself at his West London flat, using poison or gas, depending on source.

This section lists the memorials where the subject on this page is commemorated:
Szmul Zygielbojm

British History On-line puts the blame squarely on the "negligence of the ste...

From the Sub Fire Station 6W, Cheyne Place. Died in a fire which took the liv...