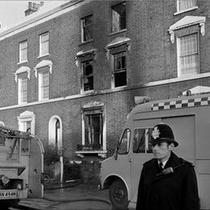 A fire at a teenagers' birthday party caused the death of 14 young people, 13 at the fire. The 14th victim was Anthony Berbeck, who escaped the fire, but became mentally disturbed and died after falling from a balcony on 9th July 1983, a possible suicide. Originally the fire was thought to be a racist attack as all the victims were black. Two inquests reached open verdicts.

We are grateful to Each one Teach one, our source for the thumbnail photos of each of the 14 dead.

This section lists the memorials where the subject on this page is commemorated:
New Cross Fire

These trees were planted in the memory of the 13 children who died in the New...

The attack happened when the pub was full of people enjoying a night out. Twe...