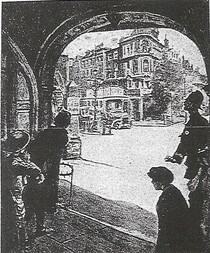 Picture source: On and Off Duty magazine, reproduced in Price, John (2008) Postman's Park

From Islington Tribune: "PC Smith heard the German Gotha G.V aircraft approaching and warned panicking factory workers in Central Street, Finsbury, to stay inside. He died when a bomb exploded a few feet away from him. The 37-year-old had a wife and a three-year-old son. The raid on June 13 killed a total of 162 people."

From Symbols and Secrets: "One press report reads as follows … 'In the case of PC Alfred Smith, a popular member of the Metropolitan Force, who leaves a widow and three children, the deceased was on point duty near a warehouse. When the bombs began to fall the girls from the warehouse ran down into the street. Smith got them back, and stood in the porch to prevent them returning. In doing his duty he thus sacrificed his own life.' Smith had no visible injuries but had been killed by the blast from the bombs dropped nearby. He was one of 162 people killed that day in one of the deadliest raids of the war. His widow ... She received automatically a police pension (£88 1s per annum, with an additional allowance of £6 12s per annum for her son) but also had her MP, Allen Baker, working on her behalf. He approached the directors of Debenhams (whose staff PC Smith had saved) and solicited from them a donation of £100 guineas (£105). A further fund, chaired by Baker, raised almost £472 and some of this was used to pay for the Watts Memorial tablet...". This information comes from the 2008 book: John Price: Heroes of Postman’s Park from where we have reproduced an image portraying the event.

This section lists the memorials where the subject on this page is commemorated:
PC Alfred Smith