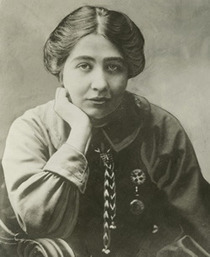 Born in Manchester as Estelle Sylvia, daughter of Emmeline Pankhurst. Trained and initially worked as an artist. Worked with George Lansbury in the East End. 1924 Sylvia moved from the East End of London to Woodford Green, into Red Cottage with Silvio Corio, an Italian anarchist/journalist/painter and her lover and companion for 30 years. Demolished in 1939, Red Cottage was number 126 on Woodford Green High Road. They ran it as a teashop. What remains is the Stone Bomb monument.

In 1927 she give birth to her and Corio's son Richard, named for her father, whom she loved and revered.

In 1935 Sylvia moved to a Victorian house, West Dene, 3 Charteris Road. When she became interested in Ethiopia she began publishing the New Times and Ethiopian News in 1936 and carried on for almost 20 years. “When the emperor, Haile Selassie, arrived in exile in Britain in June 1936 she was part of the unofficial welcoming committee that met him at Waterloo Station, presenting him with the latest edition of the paper.” (From a Radio 4 programme ‘Sylvia Pankhurst: Honorary Ethiopian’.) In 1956, at the invitation of Selassie, she emigrated to Ethiopia, and stayed there for the remainder of her life. Buried in Adis Adaba as saint/martyr of Ethiopian nation.

Diamond Geezer has tracked down a lot of the East End addresses associated with Sylvia. And Spitalfields Life quotes from Sylvia's own books to tell some of the events from the campaign.

Sylvia designed the Holloway, or portcullis badge, the image which appears on the Christchurch Gardens sculptural scroll and also on the memorial in Victoria Tower Gardens. The design consists of a portcullis symbol overlaid with a broad prisoners' arrow. The badges were given by the WSPU to women who had suffered imprisonment. A portcullis has been used to represent the Palace of Westminster, and by extension government, since the middle-ages. The broad arrow was first used on prisoners’ clothing in the 1870s. Sylvia combined the two icons very successfully.

According to Martin Plaut, specialist in South Africa, Pankhurst had a "passionate relationship" with Keir Hardie, which he attempted to end by touring the world in 1907-8.

2020: Via Facebook Gerard Greene told us that "Sylvia moved to West Dene in late 1928 or early 1929 (see Shirley Harrison's biography which reprints a letter from West Dene in 'early 1929' which is now in the IISG archive, Amsterdam)".

This section lists the memorials where the subject on this page is commemorated:
Sylvia Pankhurst

This section lists the memorials created by the subject on this page:
Sylvia Pankhurst