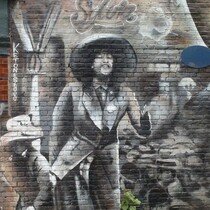 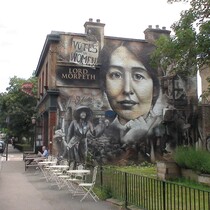 Sylvia is represented a number of times in the mural. The image we have chosen is based on a photograph (which you can see here).

Unveiled before 13 March 2018, to celebrate the centenary of the (partial) suffrage granted to women in 1918.

Roman Road London has a splendid photo of 'Local East End Suffragettes outside the Lord Morpeth Public House'.  It shows about 40 women and, from the clothes, we'd date it to the 1950s.

We published this plaque in 2015 when the wall was plain old brick. In 2018 this magnificent mural appeared. The plaque is still there, but somewhat lost.

This section lists the subjects commemorated on the memorial on this page:
Suffrage for women - 1918

Throughout history women have generally not been allowed to vote, with, by th...

This section lists the subjects who helped to create/erect the memorial on this page:
Suffrage for women - 1918

This section lists the other memorials at the same location as the memorial on this page:
Suffrage for women - 1918