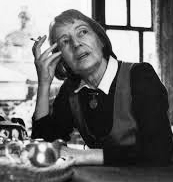 Author and poet. Born Florence Margaret Smith in Kingston upon Hull. She supposedly got her nickname when out riding with a friend, who thought she looked like the jockey Steve Donoghue. Her father was almost permanently absent, and the remaining family moved to north London. Because of her mother's ill health, she was brought up by her aunt. At the age of five she developed tuberculosis peritonitis, and spent three years in a sanatorium. She suffered from depression for the rest of her life.

She wrote three novels and many poems, including her best known 'Not Waving but Drowning'. A 1978 biographical film, Stevie, starred Glenda Jackson.

This section lists the memorials where the subject on this page is commemorated:
Stevie Smith

Novelist and poet. Born Kingsley William Amis in Norbury. His many novels inc...