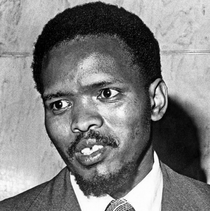 Anti-apartheid activist. Born Stephen Bantu Biko in Ginsberg Township, in what is now the Eastern Cape province of South Africa. He was initially involved with the multiracial National Union of South African Students, but later became convinced that black, Indian and coloured students needed an organization of their own, and helped found the South African Students' Organisation (SASO). On 18 August 1977, he was arrested and interrogated by the Port Elizabeth security police, which involved torture and beatings. He suffered a major head injury, and was chained to a window grille for a day. On 11th September 1977, police loaded him into the back of a land rover, naked and manacled, and driven to Pretoria, where there was a prison that had hospital facilities, and where he died shortly after arrival.

Police said his death was the result of an extended hunger strike, but an autopsy revealed multiple bruises and abrasions and found that he succumbed to a brain haemorrhage from massive head injuries. After a 15-day inquest in 1978, a judge found that there was not enough evidence to charge the officers with murder, since there were no eyewitnesses.

This section lists the memorials where the subject on this page is commemorated:
Steve Biko

Steve Biko Court This estate is named in commemoration of Steve Biko, a leadi...

Constable of Baynard's Castle.  Led the 25 barons who negotiated with King Jo...

Chairman of the Thames Navigation &amp; Port of London Committee in 1857.  W...