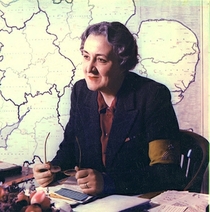 Philanthropist. Born Stella Charnaud in Constantinople (now Istanbul), Turkey. She is best remembered as the founder of the Women's Voluntary Services (now known as the Royal Voluntary Service). In 1925, she joined the staff of Viceroy Rufus Isaacs, (1st Earl of Reading), in Delhi, and eventually married him. After his death, she moved to America, becoming a close friend of Eleanor Roosevelt. In 1958 she was created a life peer in her own right, becoming Baroness Swanborough, and in 1958, the year that they were first allowed, was the second woman to take her seat in the House of Lords. Died at her home 16 Lord North Street, London.

This section lists the memorials where the subject on this page is commemorated:
Stella, Lady Reading

Philanthropist who founded workshops for disabled girls. Moved by the plight...

Born near Inverforth House, Hampstead. From the banking family. The prime mov...

A charity which provides sheltered housing  and care homes for elderly people...