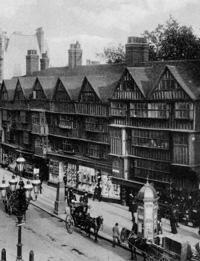 The last surviving Inn of Chancery. Attached to Gray's Inn. Things changed over time but, basically, Inns of Court were places where barristers lodged and worked, while Inns of Chancery were places where solicitors trained. Each of the four Inns of Court had two or three Inns of Chancery associated with it. All these activities were originally, back in about the 14th century, carried out in "inns", places of refreshment and lodging, often named after their landlords. The guests and their training and business activities gradually took over the inns completely.
Built in 1585, the Staple Inn building survived the Great Fire, but was badly damaged in the WW2 bombing. It was repaired. The memorial says "The entire building was reconstructed in 1937" so it seems doubtful that much original fabric remains.

This section lists the memorials where the subject on this page is commemorated:
Staple Inn

The building was also restored after World War II damage. There can't be muc...

The Settlement Movement began in England and the U.S.A in the 1880s and peake...

A long-running squat. News of evictions prompted some interviews with residen...

Resident of Sutton and poet.