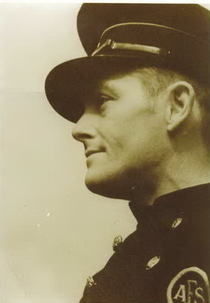 He joined the Auxiliary Fire Service and was attached to Coney Hall Auxiliary Fire Station, West Wickham. He was killed, aged 36 years, on 19 March 1941, together with four other colleagues who were aboard a pump, one of a convoy, that was travelling to a fire in Silvertown and that was obliterated in a land-mine explosion in Plaistow Road, West Ham. He and his four colleagues were buried in a communal grave in St John the Baptist Churchyard, Layhams Road, West Wickham, BN4 9HN. Administration of his estate was granted to his widow and his effects totalled £820.

He is also commemorated in the Civilian War Dead Roll of Honour 1939-1945 located just outside St George's Chapel at the west end of Westminster Abbey. His name is also shown on the National Firefighters Memorial, Sermon Lane, London, EC4 and in the Firefighters Memorial Trust's Book of Remembrance.

We found the information relating to his parents and his divorce in the same ancestry.co.uk public family tree that supplied the image. We have no reason to believe them to be inaccurate, but we could not trace any UK records about this aspect of his life and so we cannot verify those particular details.

This section lists the memorials where the subject on this page is commemorated:
Stanley Short

Our colleague Andrew Behan points out the following errors on this plaque: Fi...

Auxiliary Fireman Cecil Farley was born on 1 June 1897 in Tooting, the son of...