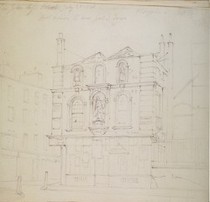 From the picture source website: "In 1710 Cass set up a school for 50 boys and 40 girls in buildings in the churchyard of St Botolph-without-Aldgate. Intending to leave all his property to the school, when he died in 1718 of a brain haemorrhage, Cass had only initialled three pages of his Will. The incomplete Will was contested, but was finally upheld by the Court of Chancery 30 years after his death. The school, which by this time had been forced to close, was re-opened, and the Foundation established."

The catchment area for Sir John Cass's first school was the Portsoken Ward of the City (see King Edgar for its origins).

Sir John Cass History is a rather good site, catering for children and old bores like us that want to understand why there are a number of buildings associated with the Foundation. Here we discovered:

To house his school in 1710 Sir John commissioned a building (see picture) on Aldgate High Street, right next to St Botolph’s Church, probably between the church and where number 9, the Matrix office block is now. This continued to house the school until in 1761, to enable the road to be widened, the Aldgate (one block to the west) was demolished along with other buildings including the school. A building in Church Row, the road running just to the east of St Botolph’s, now just a passageway, was leased and housed the school until 1861. Now the school split: the younger students stayed in Church Row, the main school moved to a new building in Jewry Street. In 1890 the Church Row school was handed over to the local education authority.

In 1898 the school moved into temporary accommodation so that the Jewry Street building could be demolished and rebuilt as the Institute for older students, completed in 1902 - the building which stands today. Another new building was erected in Dukes Place to house the Foundation School. Completed in 1909 this was damaged in WW2, in May 1941, but stands today and houses the Sir John Cass Foundation Primary School.

There are a number of tertiary education colleges that are supported by this foundation and hence bear the Cass name. In 2020, following the Black Lives Matter protests, the Sir John Cass Business School renamed itself as City University Business School and Sir John Cass's Foundation Primary School became The Aldgate School. Then, April 2021, came this announcement: "The Business School (formerly Cass) will be renamed as 'Bayes Business School' from September 2021".

This section lists the memorials where the subject on this page is commemorated:
Sir John Cass's Foundation

Architect was J.P. Gandy Deering.  The British Museum's drawing is from 1832....