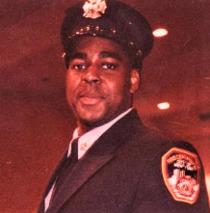 Firefighter Keithroy Marcellus Maynard was born on 22 January 1971 in Montserrat, a UK Dependency in The Caribbean.

He and his twin brother, Kevin, were sons of Reynold White and Pearl Maynard. In the 1980's he went to live in the USA with his mother and graduated from Wingate High School, Brooklyn, New York and from the Borough of Manhattan Community College in 1990. He was employed as a baggage handler with Continental Airlines before joining the New York City Fire Department in 1999.

He was initially attached to Engine 220 in Brooklyn, New York before transferring to Engine 33, Ladder Company 9 in East Village, New York.

He had swopped shifts with a colleague on 11 September 2001 to enable him to attend a school appointment with his son, Keithroy Maynard Junior the following day, and died, aged 30 years, at the South Tower, 2 World Trade Centre, Manhattan, New York, USA.

This section lists the memorials where the subject on this page is commemorated:
Keithroy Maynard